Navigate back to the homepage

The Visualization focuses on discovering important trends and events that shaped the history due to Terrorism. It also tries to make user conscious about the number of unnecessary lives lost due to these unfortunate events. 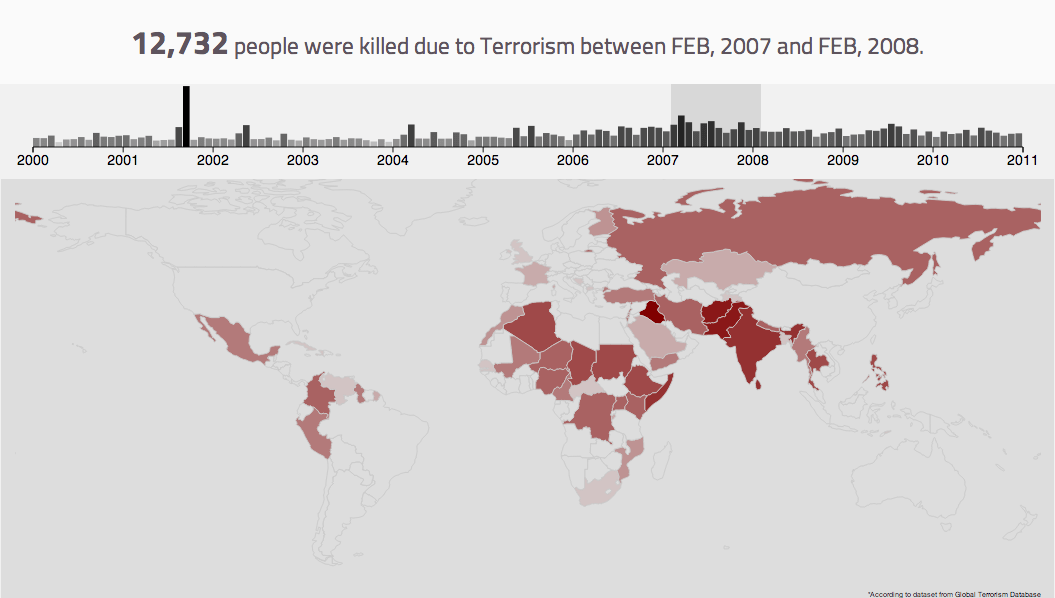 The purpose of all these three views is different. The Map view shows the high level effect on countries due to terrorism, whereas the Country wise view concentrates on comparison, ordering, discovering trends of events between two or more countries, and also it facilitates finding the event which caused the mishap. While these two views focus over a period of time, the Brushing tool helps constantly see the visualization over the full period. It also helps in controlling the other two views.

To brush and link multiple views we use a timeline as a background, which starts from first day of Jan, 2000 to Jan, 2011. It supports

To afford comparison and trend discovery between event happenings in two or more countries users can select countries by clicking them on the world map. This adds the country to the country wise view of the visualization.

Details on demand - Hovering over a country in the World Map reveals the total number of killings in that country over the period. Also, hovering over a data point in the country wise view reveals more information about the event w.r.t. to the data point. 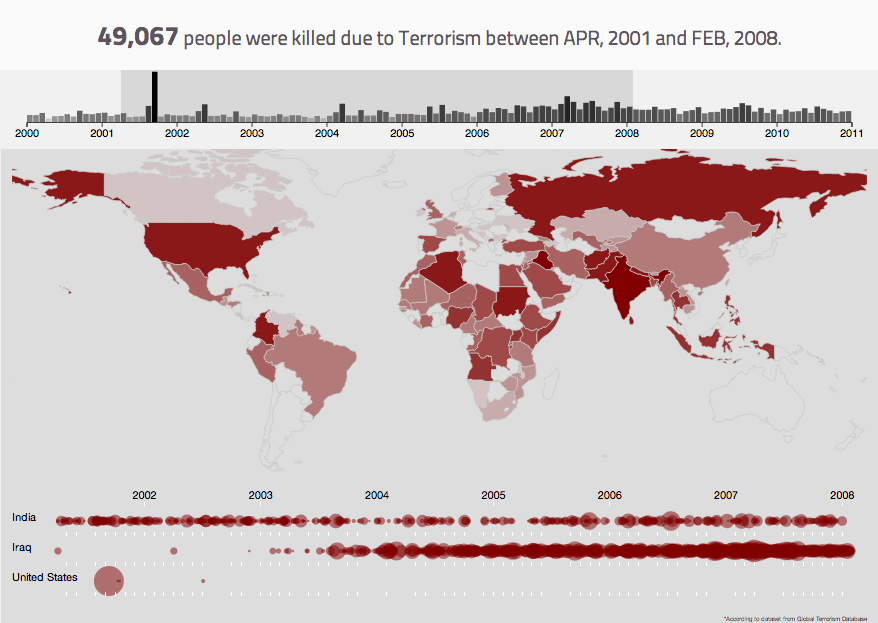 The visualization heavily depends upon dataset acquired from Global Terrorism Database (GTD, University of Maryland). It is currently the most comprehensive unclassified data base on over 113,000 terrorist events, occurred between 1970 and 2012 in the world.

The dataset was cleaned before being directly used. Many required values were null or inconsistent. For example, some of the 3 Letter country codes from the database were not matching to that in the Datamap object.

Access the visualization here. View it in full screen for better experience.

at the root and access the visualization from http://localhost:9000/ using your favorite web browser.

We started off with data search and found many datasets which called our attention. But before finalizing on one we briefly explored all of them using Tableau.

The top portion is a timeline wherein one can select the months from 2000 to 2010. It is used to brush below two visualizations. It affords all the interactions mentioned above.

Changes between Storyboard and the Final Implementation

There are not any significant changes between the final sketch and the final implementation. Though there were some stubble changes in placement of various elements, the colors, the scale used. But, the overall interaction, views and underlining objective remained the same.

Skulpturous is a 3D authoring tool which helps students, artists and possibly designers to model and visualize 3D objects. It uses your full…